A ‘Third Way’ to save the Amazon: make the standing forest itself more valuable

For decades, most of the million smallholder farmers who migrated to the Amazon basin from other parts of Brazil knew how to do one thing: clear the forest and raise cattle. But when Carlos Andretti moved to Mato Grosso state with his family a decade ago, he had different plans.

“When I bought this place, everything was pure sand,” he says.

This is the last in a four-part series, The Amazon’s Carbon Tipping Point.
Day 1: The Amazon used to be a hedge against climate change. Those days may be over.
Day 2: For illegal loggers in the Brazilian Amazon, ‘there is no fear of being punished’
Day 3: Indigenous tribes are the last best hope for the Amazon

Andretti says his 60-acre plot bordering pristine Amazon rainforest had been cleared by the previous settler for a cattle ranch, but it was so degraded that the topsoil had all washed into the river.

“I arrived here and planted the trees to restore the land,” Andretti says, embracing a very different approach to farming known as agroforestry. 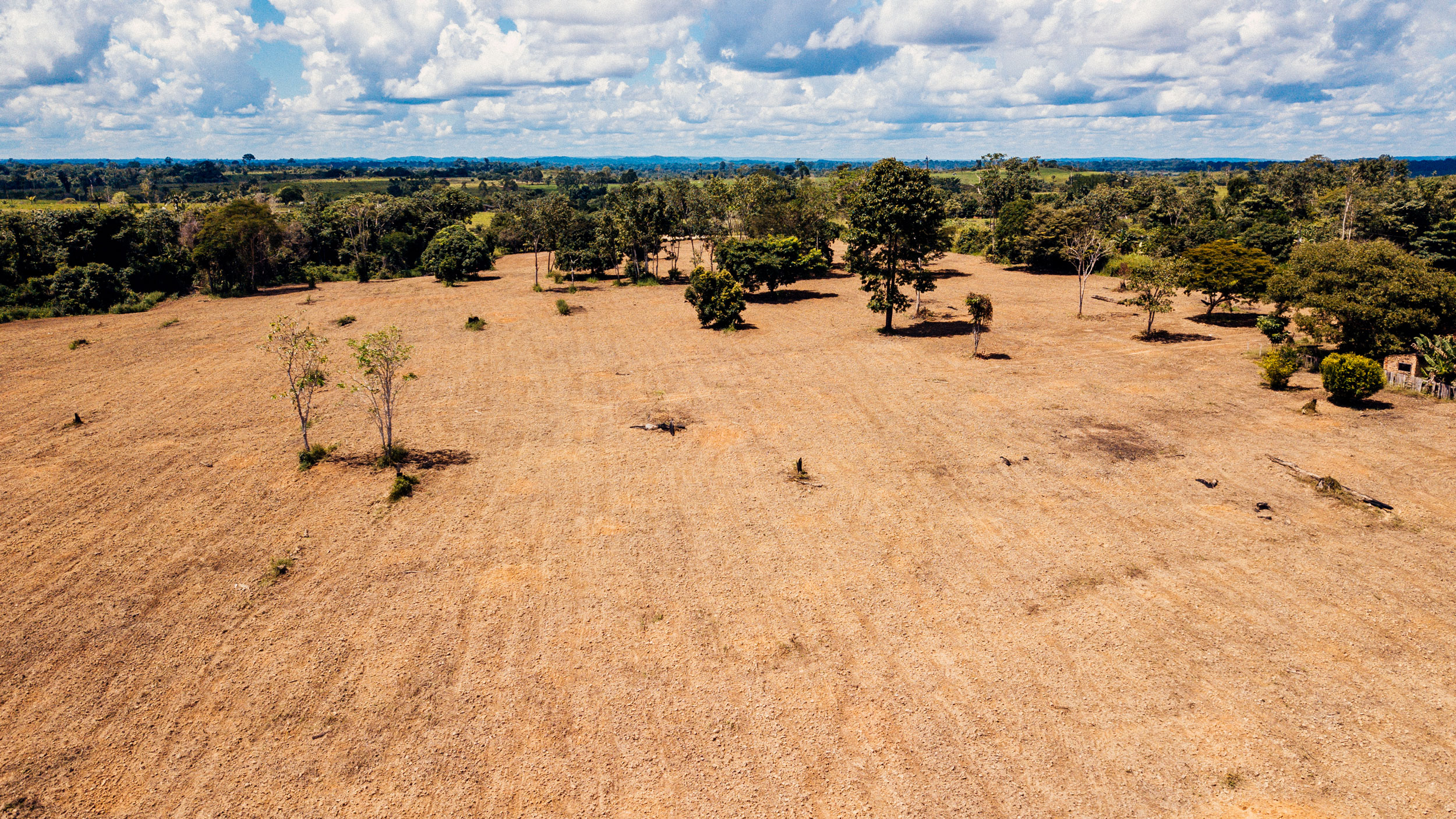 A patch of degraded pasture near Carlos Andretti’s farm. Andretti says it’s what his property looked like when he first bought it.

He went to work restoring the soil. He planted 5,000 peach palms to produce hearts of palm, along with coffee, teak trees and dozens of varieties of fruits and vegetables.

Today, much of his land is forest again. In the center of his plantation, the canopy is so thick the sun barely reaches the soil, keeping it moist even on the hottest days. The transformation has broken the usual destructive cycle of “cut, plant, graze and abandon” in the Amazon.

Andretti is proud of what he’s accomplished. But he says his decision to go with this more sustainable model was purely economic.

“Because the land is not big enough, cattle ranching is the least profitable thing you can do here, even if I had restored the pasture for grazing,” he says. 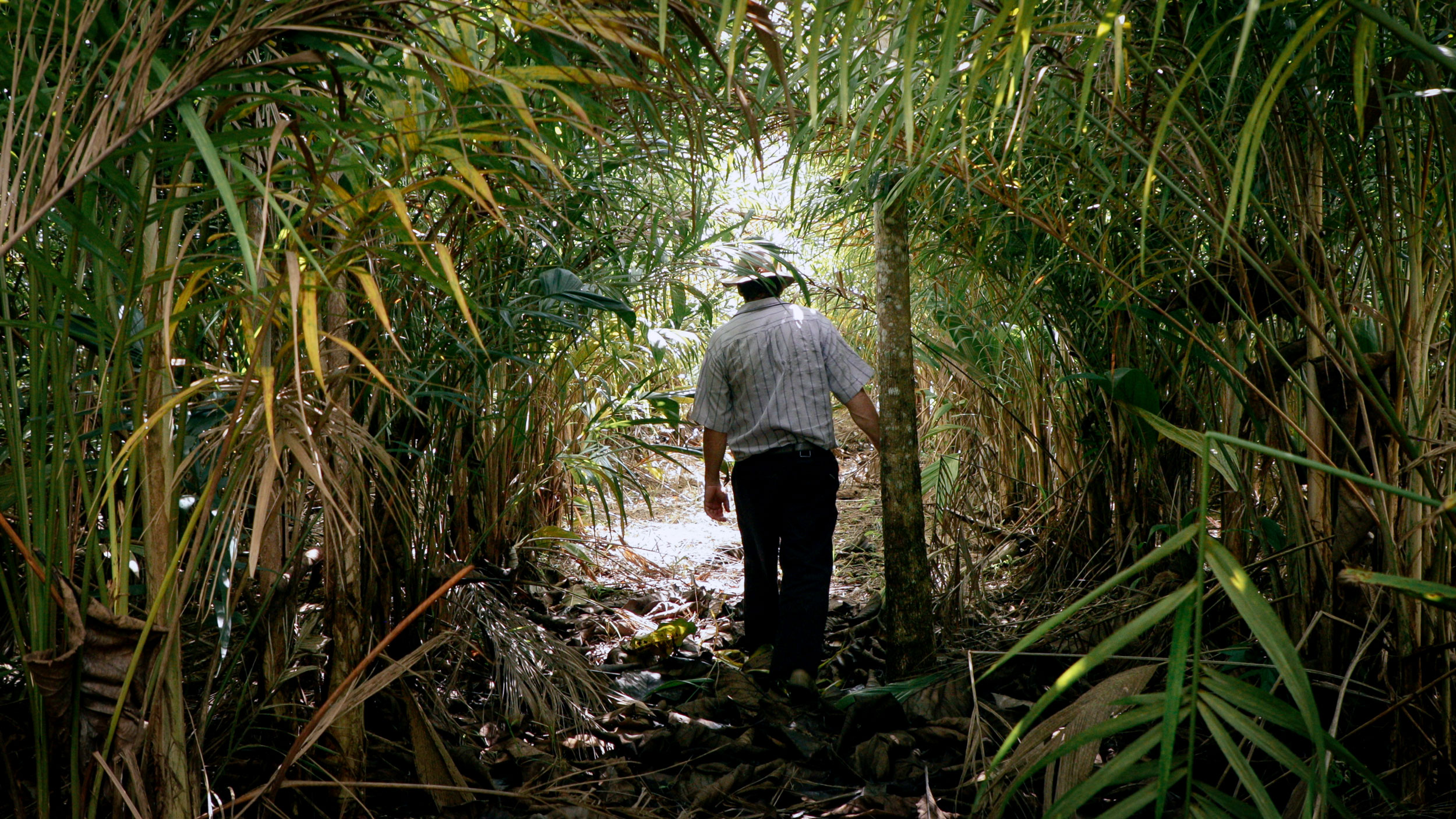 Carlos Andretti disappears into the peach palms he planted as part of his “agroforestry” plan for restoring his property.

Andretti says the peach palms alone are netting him more than three times what he’d make in cattle because he can plant so many without degrading his land — and it’s an income that will only grow as his plot matures.

“I’m producing an income to support my family and helping the environment, helping to capture carbon.”

Restoring the environment is crucial. For decades, the Amazon has sucked up a huge portion of the carbon dioxide pollution that we’re pumping into the atmosphere. Without it, climate change would be even worse than it already is. But there’s growing evidence that as development eats away at the forest, it’s losing its ability to do that.

Andretti’s method is part of a broader, new approach to preserving the Amazon — something Brazil’s leading climatologist, Carlos Nobre, calls the “Third Way.”

“The Third Way,” he says, “is an attempt to see an economic alternative for the Amazon based on the biological assets of the forest.”

Nobre says the conservation movement is failing to save the Amazon. And he says efforts to persuade industries like agriculture, logging and mining to find greener ways of doing business are also hitting a dead end.

“For a long time, most people, including myself, we thought that it was worth educating the agribusiness sector for sustainable ways of carrying out their business,” he says. “However, in practice, the agricultural frontier continued expanding.”

The lure of skyrocketing global demand for beef and soy, along with political efforts in Brazil to roll back hard-won environmental protections, are powerful incentives to continue expanding agriculture into the Amazon. It’s “making it very difficult for police and law enforcement agents to fight that,” Nobre says.

At this rate, he says, more than half of the Amazon could be lost by 2050. And that would do more than just cut into the region’s ability to capture global carbon pollution. Nobre says it would turn the region into a massive source of carbon that would basically lock the planet onto a path of runaway global warming.

“Everything is at risk now.” 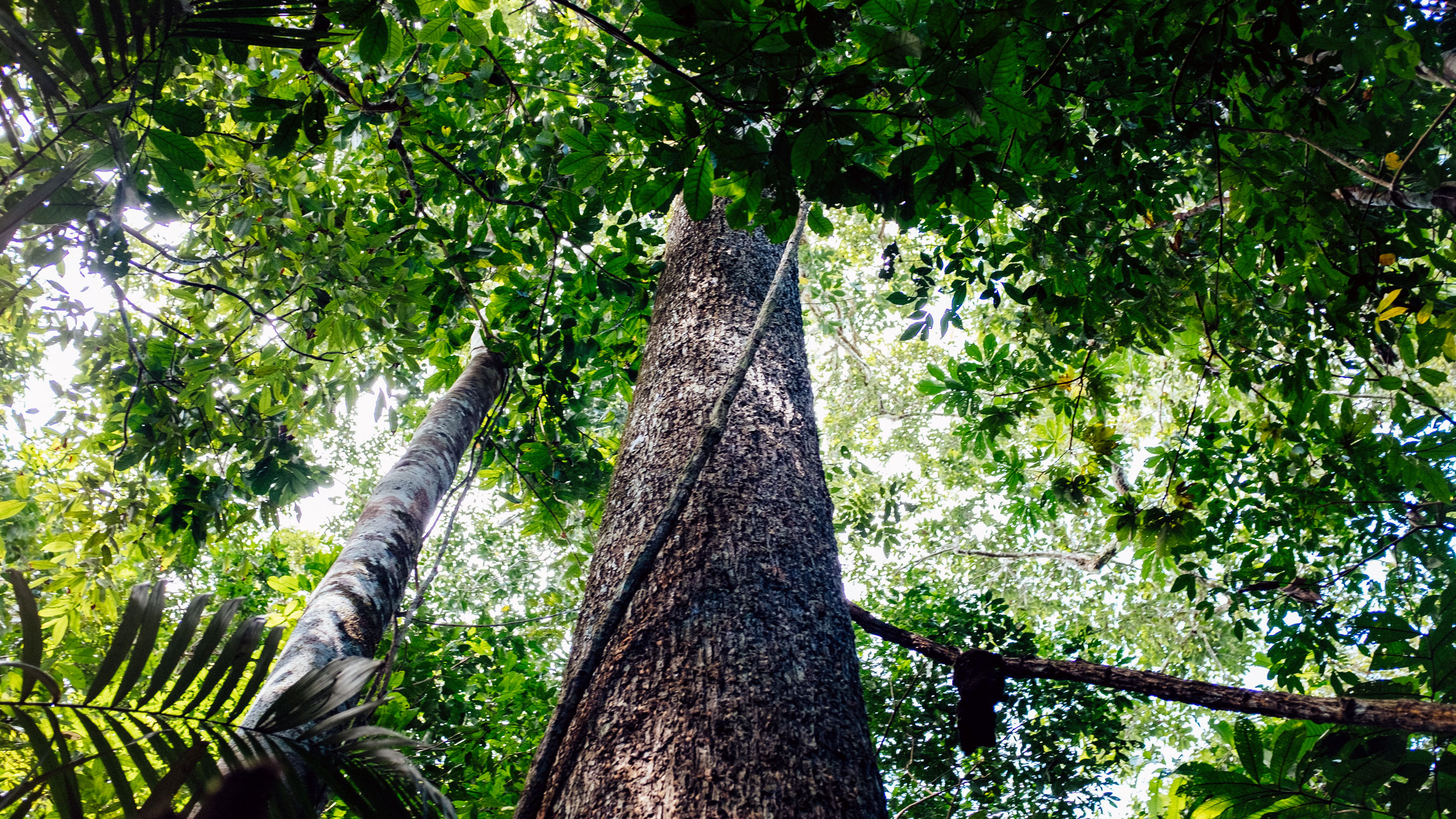 A Brazil nut tree rises high into the canopy in the forest.

This is why Nobre is pushing this Third Way, to try to save the forest by making standing trees more valuable than cleared land. It’s an idea that’s starting to catch on.

The Apiaká-Kayabi Indigenous Territory sprawls over 400 square miles of pristine rainforest in Mato Grosso. On a recent day, Chief Joaquim Crixi of the Munduruku tribe strikes a round brass bell hanging from a tree with a stick to announce a community meeting. Paulo César Nunes is coming for a visit. He’s an agronomist who set up a pilot project called Sentinels of the Forest. It works with the Munduruku and others to build a stronger market for the Brazil nuts that grow wild in the forest.

“If we want to save the Amazon, we need to invest in this kind of value chain,” Nunes says. “We need to add value to the work of the people who’ve been helping to keep this forest standing for millennia.”

Raimundo Maniwari is one of those people. He remembers tagging along with his dad to collect Brazil nuts when he was a child. These days, they ride motorbikes into the forest to gather nuts from the same trees. Back then, he says, “we’d gather the best ones, just to eat.” Maniwari says they also picked some to sell. But the middlemen, usually white farmers, often cheated them. 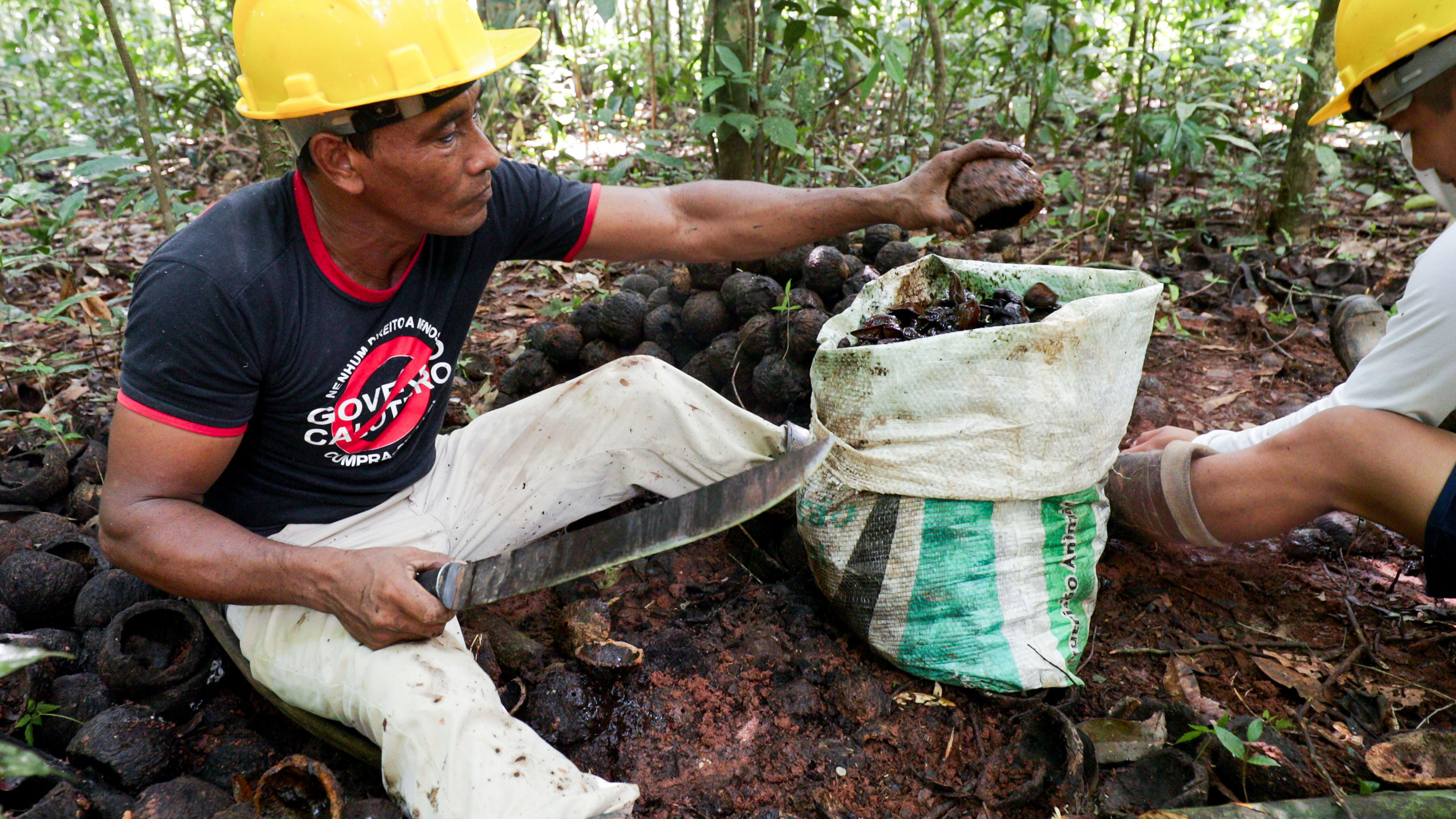 Raimundo Maniwari uses a machete to harvest Brazil tree nuts. His community earns up to ten times as much selling the nuts to a new processing cooperative than they earned selling to middlemen.

Now, by selling to Nunes’ project, they’re getting up to 10 times the price they used to get. Maniwari says that’s brought big changes to the village.

“Everyone who works with the Brazil nut has managed to improve their house,” he says. “They also bought motorbikes, stoves, things like that. So, it’s a definite advantage.”

Nunes is trying to leverage that advantage to scale up an industry that could save this forest from the encroaching agricultural frontier. The Brazil nuts Nunes buys from the Indigenous groups end up at a state-of-the-art Brazil nut factory, called COOPAVAM. It’s owned by a cooperative of small farmers near Juruena in Mato Grosso.

At COOPAVAM, lines of women crack piles of nuts by hand before machines turn them into energy bars, sold to Brazil’s schools, and into oil for the eco-friendly cosmetic giant, Natura Brasil. Nunes says he’s helping COOPAVAM build a value chain for Brazil nuts from scratch.

“When you take a kilo of Brazil nuts from the forest and process it into products like oil, it has 20 times the added value — a value that stays here in the local economy,” he says.

That doesn’t just change people’s pocketbooks — it changes their minds.